How the media sees PUAs 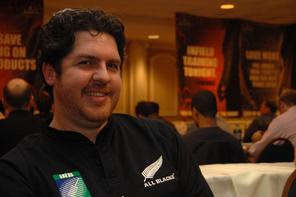 Interesting article at TBD.com today on a DC pick up seminar. There's a lot less snark than I would expect. Here's an example:

"We need daring women,” Kelvin [the PUA organizer] tells the men. “Let's go find them!" “But let's move away from the food court, because there's a lot of security here."

Surprisingly, most of the guys say there are there "to learn how to eventually meet that one special someone." Someone should write about this Game for Marriage concept.

Later on one of the instructors offers some worthy advice:
"Sex is merely the carrot; the whole event is a self-help conference in disguise. The pickup community – they call themselves "the community" for short – has veered away from scripted ruses and “negging,” a concept that teaches men to build attraction by making negative comments about a woman. Now they teach men that they just need the confidence to approach women, coupled with the ability to present how great they already are. And they state over and over: Don’t lie to women. Have a plan, but be yourself.

“Things will happen as long as you have personality, as long as she likes who you are, and as long as you’re not fake,” Speer tells the group. “Most women can see through this bullshit that we try to feed them. So the more bullshit you try to feed, the less successful you are with women.”

I never thought of guess the bra-size game:
"One of Michael Hurst’s favorite pickup moves is the guess-your-bra-size game. But be warned, gentlemen: He says you should always guess one size too high on the cup, and one inch too low on the measurement.

Hurst, the D.C.-based author of Become That Guy, speaks calmly but with a self-assurance that borders on smug. If you want to bed a woman, you’ve got to introduce sexual themes as early as you can, he says. You’ve got to say it with a knowing smile, not too seriously, while exceeding social norms for how long you can hold eye contact. He tells women: Every guy you’ve known since you were 13 has tried to scheme a way into your pants. At least he’s honest about it."

I endorse this Zen-like statement:
“Being bad with women is a symptom,” says James Norton, known professionally as Brother James, one of the founders behind D.C.-based Professional Pickup. “The cause of it is you’re bad with your life, and you’ve got to get your life right.”

On not being shy about approaching women:
"Don’t forget that it is the man’s job to approach women and begin the mating ritual, John Keegan, a lifestyle coach from New York City, tells his group of four. “We’re not bothering them, we’re doing our jobs,” he says. “No one in this world wants anything more than to make a connection. Why shouldn’t it be with us?”
Posted by Augustine DeCarthage at 8:42 PM

Augustine DeCarthage
I'm thinking through a somewhat orthodox Catholic analysis of PUA Game Theory. Guys, you need to learn some Game and have some swagger. Even for Church girls. Especially for Church girls.

Ladies Who Get It

A blog of manly idealism

Other pickup stuff from Amazon